How Disabling are Migraines? 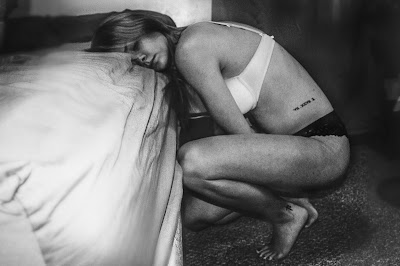 Warning: I use the f-bomb in this one more than you may like!

Struck with a migraine, I feel pissed that I am held back yet again. Migraines are not headaches. They are much more than headaches. Although they both cause pain, migraines cause sensitivity to light, sounds, and smells, but everyone's experience is different. I get this weird prickly pins-and-needles feeling around my neck, face, and head. It feels like my shoulders are up to my ears and my neck can't move because it's stiff. The pain has a combination of sharpness, tingling, and throbbing, and it's fucking insistent.

I get angry because I know I was pushed down a flight of concrete stairs landing on a hard immovable concrete floor losing consciousness when I was about 4 years old. I was slammed on concrete yet again when I was about 37 years old. I was in several car accidents. Back then, the public was able to drink and drive. I recall a time when dad hit a car after having an evening of cocktails at my aunts place. Driving home, he hit a car head on because he crossed the yellow mid-line. The four of us kids were sitting in the back seat. Of course with no seat-belts. Amazingly, we didn't hurl down the side of the cliff into the river by the dam. My sister was drinking. I was lying in the back seat without a seat-belt when the tire hit the gravel on the side of the road losing control and flying over the bank into a farmers field. I was in three consecutive accidents within six months when I was 29 years old rear ended by two and T-boned by another. If this doesn't consist of skeletal issues in the cervical spine then I don't know what fucking well does. But my migraines began when I was a child. Not later in life. I still remember leaving school with headaches in grade one Russian and grade two English only to be thought of as a liar.

Having a migraine is a fucking impairment. As soon as it feels like things or my life goals are flowing well, I get a migraine. As soon as it feels like I got a handle on my chaotic bipolar II and disorganized chaotic mind, I get a migraine. Yes, for sure, I might be feeling some self-pity right now, but geez, it's hard and I need to vent. I am not one of those advocates that quickly goes into denial only to place a happy fucking face on my front window to appear to the world that "I got this" all the time. Shit happens, and this is my shit!

For more than ten years, I've worked through issues of trauma from childhood abuse, sexual assaults, and intimate partner violence with the repercussions of a disorganized and chaotic mind, PTSD, mood disorders, and eating disorders to name a few. Yet, I still suffer from the repercussions. Not everyday, I feel strong and on top of the world to conquer every fucking thing. I falter and I get angry especially when I get a migraine. For someone, that has isolated herself for years, a migraine just reinforces this issue, and, I guess, that's difficult to deal with.

It's quite hilarious actually. When I was completing my undergraduate degree, I suffered with migraines a lot due to the lack of sleep but also with the issue of holding my head and neck down to read or write which obviously aggravated my neck. I'd wrap a soft ice-pack into a hand towel, lay it on my neck with my robe belt to hold it in place, and put on my sunglasses so I could continue to do the extensive homework required. I needed to find a way to get through the excruciating pain and to stay afloat with the homework. When you're in undergrad studies, the academic discipline doesn't give a fucking damn about your problems. You need to make the deadlines or your docked marks. I managed. I wonder sometimes how I did it, but I did. It's pure determination! Nothing else! When I want something bad enough, when someone pisses me off, or when someone says you can't, I say just fucking watch me. I guess that's one great thing about me, and why I survived a life of darkness.

I get an aura, typically, before I get a migraine. The aura can be one or even two days before it happens. I get tongue tied, dizzy, or a feeling of spinning or pulling. Knowing this, doesn't help to lessen the pain of the migraine. I usually have to reflect and see what patterns came about before the migraine happened. Hindsight is 20/20. I don't always pay attention to the signalling auras. But it doesn't help when you live in Vancouver, BC, with the constant low fucking barometric pressure, either.

So, even with the pain of a migraine and the consumption of my medications, I struggle, but I still get my ass up and out there. The only thing is that I may not step out the door as often.
Posted by Desiree Leigh Thompson at 12:21:00 PM No comments:

Translate Wake Up to Live!

Desiree Leigh Thompson
Vancouver and Kelowna, B.C., Canada
I've been life coaching, life-skills counselling, and mentoring women to build peace of mind and mental health and wellness for about 11 years now. I advocate for women who've experienced childhood sexual trauma and sexual violence. This blog is a resource for women for personal development, liberation, and empowerment. Desiree's blog is for entertainment purposes only. The author does not provide medical, legal, or other professional advice.